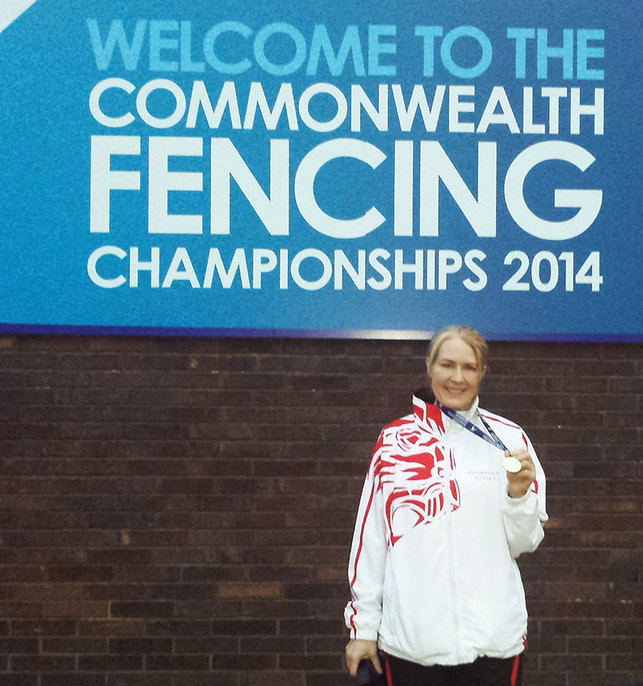 I was on the edge of my seat receiving news by text from Nicola, as she progressed through the two rounds of poules and into the DEs.

Then the next day Nicola turned into a Dream Fencing Golden girl when, with other England lady fencers she took part in the team event.

Fencing up in Largs Scotland was an experience. Largs is a pretty seaside resort, a famous ice cream parlour and even some sunshine!

Whilst the organisers were friendly and helpful, the actual organisation was rather haphazard and most anxiety was spent by fencers wondering if transport would actually get them to the venue.

The ladies epee competition saw fencers from the four home nations plus Canada, Australia and New Zealand aged 40-85. This was a truly great experience with great respect shown to the more elder competitors.

The day started early with a 6.30am bus ride. Seeding was rather random but soon sorted itself out with two rounds of poules. In the first poule I fought well, was undefeated and seeded 4th. The second round saw me drop just the one fight 5-4 so I maintained my position.

The DE fights were to ten hits which didn't leave any room for error and as always were quite a tense affair. My first two matches were against Australians. Working hard to stay focused I had two convincing wins.

Through to the last 8 and the tension escalated as the next fights were for commonwealth medals. I then drew a fellow country woman and was doing well at 5-1 up, then my opponent changed tactics and levelled the score at 6-6. I dug deep, settled myself, maintained my composure and to my delight, won on priority.

Into the last four I then drew the number one seed. The fight was a close affair but I missed out on the finals by just one hit, but delighted to have won a bronze medal!

Being asked to captain the England team the next day was a great honour and we found ourselves seeded first.

In our bronze fight against Scotland saw us maintained our lead from the outset to win convincingly. The Final and bout for gold was against the Canadian 'Giants', on the raised piste in front of a cheering crowd. I started nervously going down 5-3, then slowly hit by hit England moved ahead. By the second to last fight England had a narrow lead of two hits and it was my turn to come back on the piste. Fired up and really wanting gold I won my last fight 10-3 leaving my fellow team mate ten points clear to easily win the match.

A great result for England, me and Dream Fencing, and I have to say a huge thank you to Yosif for his coaching, support and advice making it all possible.